Beijing 'may be playing risky game in 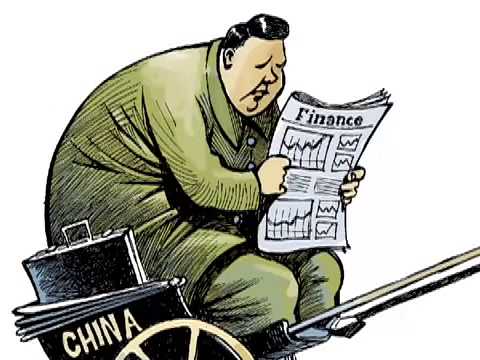 THE Chinese stock market is on fire after a rally sent the benchmark equity index to a seven- year high, but experts say Beijing could be playing a risky game in its bid to revive the economy through a boost to stocks.


After a previous market crash wiped out more than US$3.5 trillion (S$4.7 trillion) from the market's 2007 peak, a new bull run has taken hold. The Shanghai index has more than doubled since the run-up began last July.
While stocks have been gaining on the back of expectations of new measures to spur the slowing Chinese economy, experts say this rally is not without a key cheerleader - Beijing itself. Read More.
Huge Rally -  Remember Japan

Disaster Is Inevitable When The Two Decade-Old Stock Bubble Bursts

https://plus.google.com/u/0/107391577397780108116
Six years after the Global Financial Crisis, the U.S. stock market continues to soar to new heights with nary a pullback or correction. In this piece, I will explain why the stock market is experiencing a new bubble that is actually another wave of the bubble that has existed since the mid-1990s.
A two-decade old bubble? Yes, you’ve read that correctly. Most people will consider this assertion preposterous, but the facts don’t lie. Though the U.S. stock market has been experiencing a bubble for two decades, it will not last forever. I believe that the ultimate popping of this bubble will have terrifying consequences for both investors and the global economy that is tied so closely to the stock market.
The SP500 stock index has more than tripled since its low in 2009, but that doesn’t mean that we are out of the woods. On the contrary, this is the calm before the storm. Read More.


The childish fabricated theories of neoclassical economics, that have been driving humanity, economies and stock markets towards a collapse of Jericho's metaphoric proportions and finality, can perhaps be best understood when we bring the real governing ecological, geological and other related sciences to bear, These existential rules cannot be overcome by the silly rhetoric of current economic dogma,nor any of its possible abstract fabrications and outright lies, no matter how many Nobel Prizes, Phds and other laureates you bestow upon these  crazy mad men, who still head this truly - "MEDIEVAL CULT."This video presentation by Charles A S Hall, Ecologist - provides excellent insight into what our real circumstances are and the governing universal laws that we face  - who ultimately have the final say in all physical and related natural matters, regardless of our human hopes, beliefs or aspirations. These cognitions are all muted by this absolute context. At the same time, another absolute villain also joins with science,paying little attention to any of  our rumblings, rantings - and particularly, those discourses of utter nonsense that were preached, "to so many, by so few," with impunity over the past 200 years. https://youtu.be/YwdwUStzxwwExponential mathematics is, of course, the other known outlaw joining these evil scientific laws, who together in concert will permanently and finally push the pathetic rock of neoclassical hogwash over the proverbial cliff, forever. Sadly, but only after orchestrating and inflicting through its teachings,  practices and intellectual perversions, unimaginable crimes against the planet and its mostly innocent inhabitants.https://youtu.be/u5iFESMAU58Future intergalactic visitors shall certainly be amused by how we built so many statues with so few, if any, apparent natural resources. They shall  puzzle and wonder, just as the European explorers once did  - " who would cut down the last tree? "