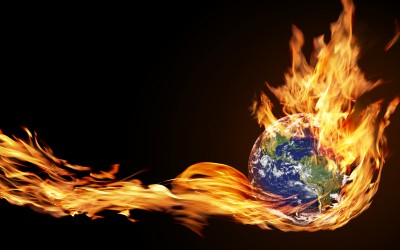 Many of us who have been paying attention to the state of the world over the last half century have now begun to realize with growing horror that the progressive deterioration we have been tracking shows no signs of resolution   In fact, to some of us it looks as though there is no way to resolve this deepening crisis. The end of the track is in sight. The planetary factory is in flames, and all the exit doors are barred.

Proposed technical solutions are utterly inadequate to the scale of the problem.  Many ideas like geoengineering will simply make matters worse.  There is no political constituency for degrowth – none at all.  There is precious little political support for even putting a light foot on the brake.  This road to Hell has been paved with the very best of intentions – giving our children a better life stands near the top of the list – but here we are nonetheless. The climate is signalling that our future may be a little warmer than we were expecting, once our seven-billion-passenger train passes those gates.

Now that the denouement is in sight, I’m setting aside the anger and outrage, the blame and shame, to focus my attention instead on why this outcome seems to have been utterly inevitable and unstoppable.

Why has this happened?  I don’t buy the traditional “broken morality” or “flawed genetics” arguments.  After all, our genetics seemed to be perfectly appropriate for a million years, and the elements of morality that some of us see as sub-optimal (the greed and shortsightedness) have been with us to varying degrees since before the days of Australopithecus. I don’t think it’s just a mistake on our part or a bug in the program – it appears to be a part of the program of life itself. It looks to me as though much deeper forces have been at work throughout human history, and have shaped this outcome.

The main difficulty I have with all the technical, political, economic and social reform proposals I've seen is that they run counter to some very deep-seated aspects of human behavior and decision-making.  Mainly, they assume that human intelligence and analytical ability control our behavior, and from what I've seen, that’s simply not true.  In fact, it’s untrue to such an extent that I don’t even think it’s a “human” issue per se.

I have come to think that most of our collective choices and actions are shaped by physical forces so deep that they can’t even be called “genetic”.  I haven’t written anything definitive about this yet, but the conclusion I have come to in the last six months is that a physical principle called the "Maximum Entropy Production Principle”, which is closely related to the Second Law of Thermodynamics actually underlies the structure of life itself.  Its operation has shaped the energy-seeking, replicative behavior of everything from bacteria to humans.  All our intelligence does is make its operation more effective.

This principle is behind the appearance of life in the first place, has guided the development of genetic replication and natural selection, and has embedded itself in our behavior at the very deepest level. Like all life, our mandate is simple:  survive and reproduce so as to form a metastable dissipative structure.  All of the human behavior and history has been oriented towards executing this mandate as effectively as possible.  This “survive and reproduce” program springs from a universal law of physics, much like gravity. As a result, it even precedes genetics as a driver of human behavior.  And lest there be any lingering doubt about the connection to our current predicament, the survival imperative is what causes all living organisms to exhibit energy-seeking behavior.  Humans just do this better than any other organism in the history of the planet because of our intelligence.

In this context, the evolutionary fitness role of human intelligence is to act as a limit-removal mechanism, to circumvent any obstacles in the way of making make our growth in terms of energy use and reproduction more effective.  It’s why we are blind to the need for limits both as individuals (in general) and collectively as cultures.  We acknowledge limits only when they are so close as to present an immediate existential threat, as they were and are in hunter-gatherer societies. As a result, we tend to make hard changes only in response to a crisis, not in advance of it.  Basically, the goal of life is to live rather than die, and to do this it must grow rather than shrink.  This imperative governs everything we think and do.

As a result, I don’t think humanity, in general, will put any kind of sustainability practices in place until long after they are actually needed (i.e. after population and consumption rates have begun to crash).  I don’t think it is possible for a group as large as 7 billion people to agree that such proactive measures are necessary.  We are blind to the need for limits as a fish is to water for similar reasons. After the crisis has incontrovertibly begun we’ll do all kinds of things, but by then we will be hampered by the climate crisis and by severe shortages of both resources and the technology needed to use them.

I have given up speculating on possible outcomes, because they are so inherently unpredictable, at least in detail.  But what I’m discovering about the way life works at a deep level makes me continually less optimistic.  I now think near-term human extinction (say within the next hundred years) has a significantly non-zero probability.

Our cybernetic civilization is approaching a "Kardashev Type 0/1 boundary" and I don’t think it's possible for us to make the jump to Type 1.  Like most other people, Kardashev misunderstood the underlying drivers of human behavior, assuming them to be a combination of ingenuity and free will.  We indeed have ingenuity, but only in the direction of growth (and damn the entropic consequences).  We can’t manage preemptive de-growth or even the application of the Precautionary Principle, because as a collective organism humanity doesn't actually have free will (despite what it feels like to us individual humans).  Instead, we exhibit emergent behavior that is entirely oriented towards growth. 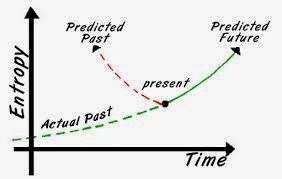 I see no purpose in wasting further physical, financial or emotional energy on trying to avoid the inevitable. Given our situation and what I think is its root cause, I generally tell people who see the unfolding crisis and want to make changes in their lives simply to follow their hearts and their personal values.  I'm not exactly advising them to “Eat, drink and be merry”, though.  You might think of it more as, “Eat, drink and be mindful.”
Paul Chefurka
August,2013
Ottawa,Canada

We struggle to explain why the conventional economic doctrine battles the realities of existential economic science; the first hypothesizes an infinite positive sum-game for human activity, while the latter goes begging to find a wider audience for its voice - that asserts a finite negative sum-game, dictated by the physical constraints and the laws of exponential mathematics. These two beliefs are deeply conflicting with one another because the first chooses to ignore the governing rules of the universe, whereas the other proposes integration with science, physics and mathematics, in order to set a better path for human activity.

So in our search for explanations we look to other writers, scholars, thinkers and activists for insights into why our collective actions and theories act in defiance of realities by endorsing infinite growth doctrines that are not only impossible to continue any longer, but they also push our species along an accelerated path destined for premature extinction.

As Paul Chefurka sets out in “Paradise Lost” maybe there is nothing to be done or anything else that can be said. Our internal wiring is so connected to the natural forces of the universe that it causes us to pursue and use more energy to serve our primary purposes of survival and procreation. Call it an inborn energy-seeking behavior. We are then just an integral natural part of the second law of thermodynamics serving to further and accelerate the causes of entropy in the whole universe. That being the case, conventional economic doctrines sadly wins the battle, as it is clearly aligned with entropic forces that invisibly shapes the destiny of humanity, the universe and eternity.

Hence in our last analysis, it as certain as it gets that we cannot defeat eternity, but that in itself should not dissuade us from seeking to optimize our entropic relationship with the universe in pursuit of a longer path. Too many things could happen along the way!

Links to Other Related Articles: